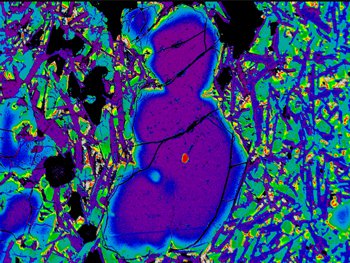 A SIGNIFICANTLY HOTTER MANTLE BENEATH ICELAND

We have shown that the Icelandic mantle is unusually hot, a result which has been featured in AGU’s Eos magazine.  We measured the chemistry of olivine and spinel crystals that grew from magmas sourced directly from the Icelandic mantle. These crystals recorded crystallisation at almost 1400°C, indicating that the underlying mantle must be at least this hot. By developing a model to account for how the temperature of the mantle changes during melting, we were able to show that this crystallisation temperature is consistent with a mantle temperature prior to melting of closer to 1500°C.  This is more than 160°C hotter than the mantle underlying most regions on Earth.

Read the full article on Eos: A significantly hotter mantle beneath Iceland

And head here for a more detailed summary of the science.

Cover image – A false color image of an olivine crystal (centre) found in the Borgarhraun eruption of north Iceland. The color picks out variations in the crystal’s composition. We estimated the temperature at which the crystal grew by comparing the composition of the olivine to that of the spinel crystal which has been trapped inside it (small red circle inside crystal) . Horizontal scale = 1.5mm.